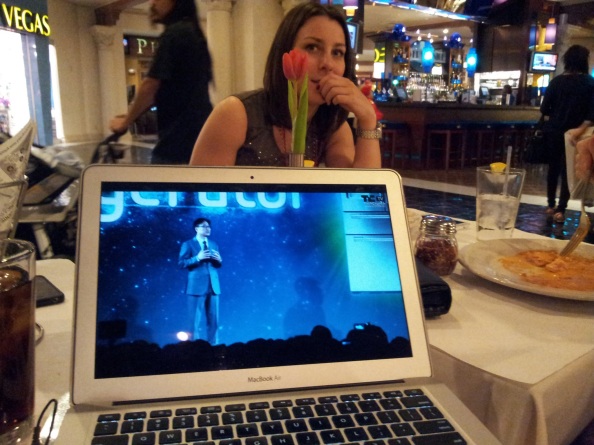 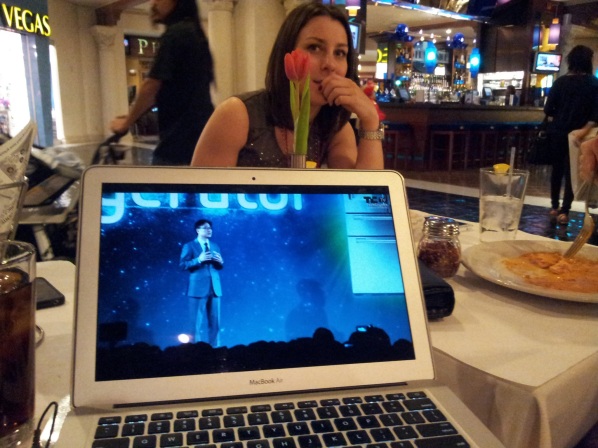 We deliberately flew into Las Vegas early so that we could attend the Samsung press conference where they were to “push the boundaries.” We stood in line for 45 minutes with what seemed to be at least a thousand other journalists, only to be stopped at the door. The event was “at capacity.” And even though I have the latest and great Galaxy Note (which was just announced by AT&T this morning), there were a bunch of Korean journalists who were similarly equipped. So that wasn’t going to get me any preferential treatment.

As pictured above, we did the next best thing.  I pulled out my T-Mobile mobile broadband router (AT&T Edge service at the Venetian Hotel) and found a live stream of the Samsung event.  Then I ordered some pasta for lunch.

Samsung is the 21st century’s Sony.  They’re innovating at a fast and furious rate at the consumer level.  As their leadership expressed today, the television is at the heart of their strategy.  And what impressed me most was that if they hadn’t actually mentioned the size of their latest devices (45″ – 65″), you would have sworn that they were talking about cellphones: dual core processors, cameras, mics, voice and gesture control.  The only difference between the two platforms seems to be one fits in your pocket, the other in your living room.

But that’s just the pedestrian stuff.  Samsung’s mobile devices will now serve as the remote controls for their new point-and-shoot cameras (use your cellphone to focus, frame, shoot and e-mail the photo you take with a Samsung camera), or even your washing machine.  This is the ubiquitousness of digital consumer technology that I most recently wrote of in my book.