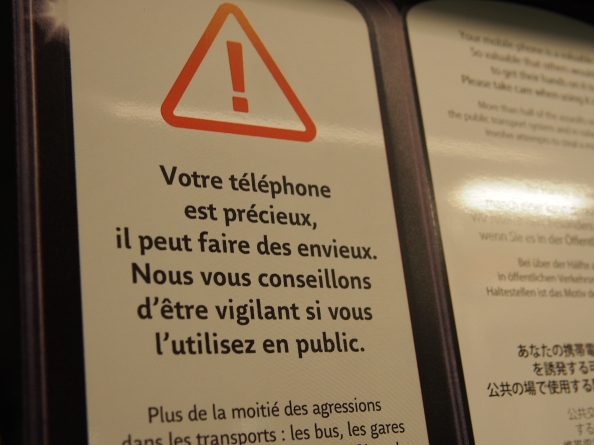 I was jarred by the familiar Apple chime from the table adjacent, as I sat down for lunch with my wife in the shadow of the Pantheon in Paris last week. Across the street, was the scene of the crime from two decades past: a place where I attended a single mind-numbing class in European Union social law and never returned until my final oral exam with a TA who would never know that I had skipped the entire semester (shhh don’t tell my students that I was such a truant!).

As a foreigner during this Dark Age, I descended upon the City of Light with scant technology: a portable Sony CD player and a pair of Aiwa speakers. My communication tools back then were fountain pen, paper, phone cards and postcards. So to return now, to a place where they take meals and downtime so seriously, only to have them so regularly interrupted by the world reaching out to diners’ pockets and purses seemed almost foreign (and offensive) to me, given the powerful, lingering memory of my time spent in this historic neighborhood.

Not to say I was going to let nostalgia interfere with my current communicare operandi. At this present day lunch, I was laden with my Galaxy Note II (with an extra battery and an emergency charger), along with an old Nokia N8 (with an international SIM card), an iPad, a mobile Boingo account and a Garmin Fenix GPS watch. It makes one wonder how I endured the lonely disconnected days of the early 90’s. But a year previous, I had begun to build this survival kit replete with redundancies thanks to my first traumatic visit to the mammoth, overloaded Consumer Electronics Show in Las Vegas (to which I have returned this year, and where I write this now).

Good thing too. A couple of days after our lunch in the Latin Quarter, we decided to pay a visit to renowned news photographer, Peter Turnley. We hadn’t seen Peter in person since he played my wing man one drunken night in his apartment in the Marais neighborhood 13 years previous (he, his spouse and I just having spent considerable time in Kosovo covering the armed conflict there), suitably impressing the woman who would later become my wife. As we all took the tiny elevator in Peter’s 300 year-old building, eager to start reminiscing — it stalled.

Now Peter has covered almost every revolution and war of the last thirty years. He was the one who inspired me to always have a camera ready to go (aka “loaded for bear”), because you just never know when history is going to strike. But he was spectacularly ill-equipped to rescue us from this predicament: the building was under renovation and it was a Saturday, so there was no one within earshot. Despite the proliferation of mobile technology on the Continent, all Peter had on his person was an $8,000 Leica M Monochrom the illustrious German camera company had given this famous street photographer to try out (it has a black & white-only sensor, which apparently allows for amazing available light image capture). I had my two cellphones with plenty of battery backup, but only the American one was giving me an intermittent one bar of signal strength.

So as Peter cried out for help, I struggled to make a phone call. Somehow, we managed to connect with friends who worked at the nearby brasserie, who called both the police and the elevator company (the in-elevator phone was out of service). Two hours later, two local bike cops showed up. Their first question: is everyone ok? Their next, to ensure that they were card-carrying Frenchmen: were we hungry? Luckily, we had purchased some croissants before getting stuck (from a bakery close to wear the Knights Templar used to hang — paging Dan Brown), which sustained us. And I had my Olympus E-M5 camera, which unlike Peter’s beautiful contraption, shot both video and in color! Hence this short film of our rescue from the elevator:

A week later, I have all the aforementioned gear with me ahead of CES 2013, in addition to some loaners from AT&T: the Samsung Galaxy camera, and the awesome MiFi iLiberate mobile hotspot — both loaded with active SIM cards and data plans, which have bolstered my connectivity options at the notoriously internet-challenged show. CES officially starts tomorrow, with its 150,000+ attendees, 31 football fields of space (“the Superbowl of technology”). All talk is about the so-called “Internet of Things” with the smartphone and tablet taking center stage (and playing a central role in our “smarter” lives as I heard from Samsung and LG over the last 24 hours). But as I discovered at two sessions that I attended today, even as we celebrate all this connectivity, gadgetry and ultra high definition, the larger question remains: do we even have the appropriate content to fill all these burgeoning, demanding channels? As our friend Peter Turnley continues to teach photo workshops, travel to the world’s hotspots and produce beautiful coffee table books about Paris, he may ultimately prove that content trumps connectivity…but it doesn’t hurt to double-up on your communication devices (and croissants!) in case of disaster.