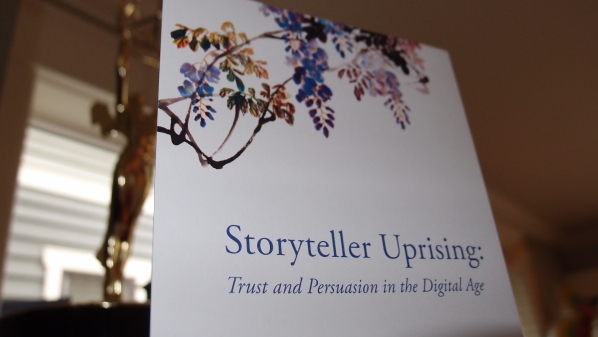 Every three years or so, I take an abrupt left turn along the meandering donkey trail that is my superhighway to professional success.  From business to law student, to network news producer, to backpack TV journalist, to independent filmmaker to digital media strategist to academic.  A dean at Northwestern University once wondered aloud as to my ability to make the appropriate course correction at the right time, “It was either by design and you’re absolutely brilliant, or you made it up as you went along and you’re absolutely lucky.”

It’s not false modesty when I say it was the latter.  As a pedestrian in New York City, I always like to walk on the edge of the sidewalk.  It’s a little more precarious, so close to the aggressive drivers.  But it gets me places faster, even as it keeps me away from the crowd.  That’s pretty much how I live my life.  I like to take precarious new directions to see where it gets me; I’m just unable to walk with the crowd.

Journey metaphors aside (alright, one more), I write this because I’m due for a left turn, as I complete my fourth year as an academic.  I’ve poured a lot of energy into charting the direction of the Master of Communication in Digital Media.  It’s been fruitful, exhilarating and exhausting.  The program is in terrific shape, we’ve developed the highly successful Media Space TV show, the nascent Four Peaks professional network, and my Storyteller Uprising concept is not only the title of my manifesto-in-progress, it has served as a wonderfully provocative title for a number of talks that I’ve given over the last year — from Silicon Valley to Seattle Arts & Lectures.

The image above is of an invitation I received yesterday, announcing my keynote presentation to the Board of Trustees of the “world’s largest library cooperative”, OCLC.  Seeing my creative work embodied by such a beautiful artifact gives me great satisfaction.  But it, along with a talk I gave to the technology and marketing folks at the Seattle Opera yesterday, continues to remind me that the central ideas that I’ve developed for Storyteller Uprising are a culmination of  introspection, experimentation and entrepreneurial application.  In other words they emanate from what feels like a now-concluded period of “doing.”  I’m not a scholar.  I don’t want to be.  I don’t find inspiration and new ideas in research, they come to me through inserting myself in the middle of developing situation (whether breaking news or disruptive technologies).  And I feel the urgent need to “do” again to generate a new set of ideas.

Luckily, my excellent colleagues somehow figured me out quite quickly.  That’s why they sent me on “leave” this quarter — to continue work on the book, restore work-life balance, and to fill up the creative tank.  It also explains why, in the past week, the university — an institution renowned for its scholars — has worked with me to reconfigure my position in a decidedly non-scholarly way so that I have more freedom to “insert myself” into whatever developing situation I judge to be relevant to my work and to the MCDM.  I’ll still be Director, but engaging more in endeavors such as Four Peaks, as well as partnerships with outside organizations that benefit the University of Washington.  It’s a fabulous gift.  I hope that as I seek out new, unfamiliar places, the work that I’m completing now will provide momentum to move forward.