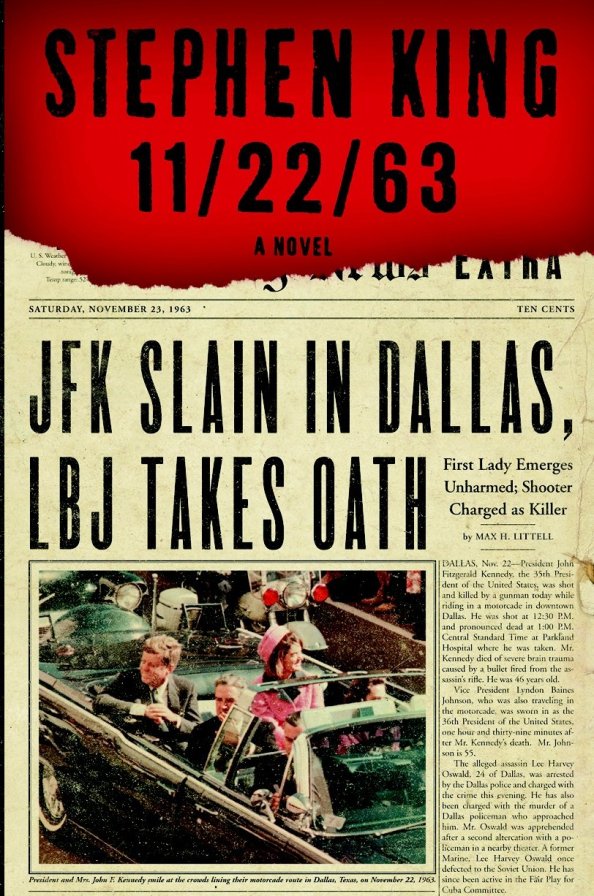 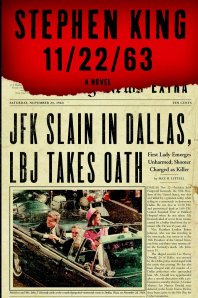 1. 11/22/63 Stephen King: “On November 22, 1963, three shots rang out in Dallas, President Kennedy died, and the world changed. What if you could change it back? Stephen King’s heart-stoppingly dramatic new novel is about a man who travels back in time to prevent the JFK assassination—a thousand page tour de force.”

I may have still been a teenager when I read my last Stephen King novel.  But the reviews on this one have been outstanding (some even say “masterpiece”).  I purchased the Audible audiobook edition, and was glad I did.  The narrator totally hit the mark, and the story was uh, a “page turner” through my Bluetooth headphone tethered to a smartphone.  King really makes you think, embeds a love story in the underlying storyline, and doesn’t insult your intelligence.  Most wonderfully, he provides a sense of place for a world long passed (pre-Beatles America, with morality, technology and social mores that we can hardly comprehend).  The first seasons of Mad Men (1960, when women and non-whites “know” their place) and Downton Abbey (1912, when electricity and upward mobility are largely figments of someone’s wild imagination ) succeed due to this as well — along with sharply drawn characters who really make you care. 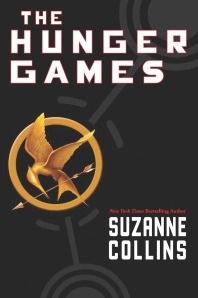 2. The Hunger Games Trilogy: “The Hunger Games trilogy takes place in an unidentified future time period after the destruction of the current nations of North America, in a nation known as “Panem.” Panem consists of a rich Capitol, located somewhere in what used to be North America, and twelve (formerly thirteen) surrounding, poorer districts which cater to the Capitol’s needs. As punishment for a previous rebellion against the Capitol wherein twelve of the districts were defeated and the thirteenth destroyed, every year one boy and one girl from each of the remaining twelve districts, between the ages of twelve and eighteen, are selected by lottery to participate in the “Hunger Games.” The Games are an event where the participants, called “tributes,” must fight in an outdoor arena until only one remains. The winning tribute and his/her corresponding district is then rewarded handsomely.”

This trilogy has a terrific premise and a phenomenal, unpredictable main character.  Categorized as “teenage fiction” I dreaded the second coming of Twilight (I haven’t even tried those books, and survived 10 minutes into one of the films).  But I was quickly dispelled of any concerns.  Yes, there’s a love triangle.  But I can live with it because the plot is pretty darn amazing, and there’s a merciful absence of teen sex.  That said, the writing gets sloppy, and details are glossed over, especially near the end.  This is one instance where I believe that the films may actually end up being better than the books.  We even have tickets for the film’s opening weekend (IMAX of course).  I read this on my Kindle (at the time, cheaper than purchasing separately, or in paperback).  As I discuss during this month’s App Wrap appearance on New Day Northwest, you can actually read each e-book for free if you have an Amazon Prime account (though it’ll take you an entire quarter to do so as you’re only allowed to “borrow” one e-book a month in the Kindle Store). 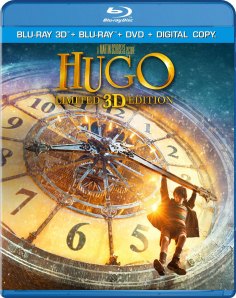 3. Hugo: “In resourceful orphan Hugo Cabret (Asa Butterfield, an Oliver Twist-like charmer), Martin Scorsese finds the perfect vessel for his silver-screen passion: this is a movie about movies (fittingly, the 3-D effects are spectacular). After his clockmaker father (Jude Law) perishes in a museum fire, Hugo goes to live with his Uncle Claude (Ray Winstone), a drunkard who maintains the clocks at a Paris train station. When Claude disappears, Hugo carries on his work and fends for himself by stealing food from area merchants. In his free time, he attempts to repair an automaton his father rescued from the museum, while trying to evade the station inspector (Sacha Baron Cohen), a World War I veteran with no sympathy for lawbreakers. When Georges (Ben Kingsley), a toymaker, catches Hugo stealing parts for his mechanical man, he recruits him as an assistant to repay his debt. If Georges is guarded, his open-hearted ward, Isabelle (Chloë Moretz), introduces Hugo to a kindly bookseller (Christopher Lee), who directs them to a motion-picture museum, where they meet film scholar René (Boardwalk Empire‘s Michael Stuhlbarg).”

I don’t get out to the movies very often anymore.  Because of this, I can wholly justify the purchase of a blu-ray disk if I’m assured that my family will watch the film more than once.  It helps if there’s a 3D version (I’m still experimenting with this technology) and a digital copy.  In this instance, Hugo is an immersive triumph in 3D — it entirely justifies that use of that third dimension.  I’m also a sucker for any portrayal of Paris, given that I once lived there and still consider myself a Francophile.  On the other hand, the digital copy is an utter travesty in usability and Hollywood studio clenched-butt-cheekery.  Paramount’s Ultraviolet platform is proof that the movie business is ultimately run by a desperate gang of oligopolists who need the tech world to beat them into submission (Netflix, iTunes) to make anything digital work properly.  Ultraviolet requires two online memberships, and even then, I need to stream the movie to my iPad to watch it on a mobile device.  In this instance, Handbrake is your friend.  Given that open source software’s .fr URL extension, we continue to owe a massive debt of gratitude to the French when it comes to the movies.