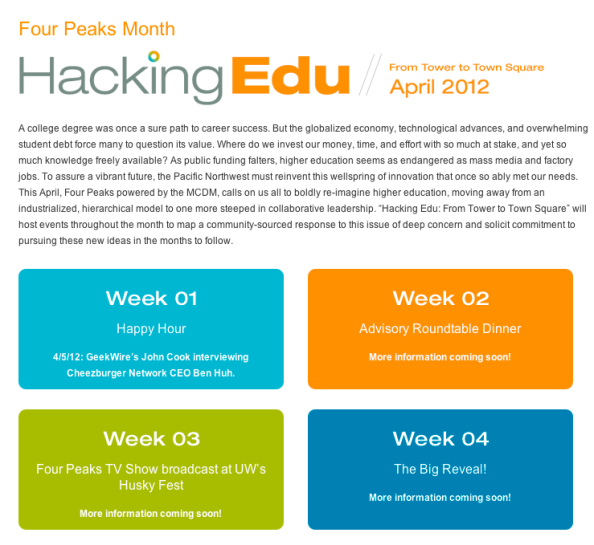 I direct a highly-respected graduate program for professionals looking to engage and persuade through digital platforms.  Over the last decade, that technology has severely disrupted business models that were once held sacrosanct in the industrial age: journalism, music, politics, mass communications.  We no longer need institutional permission to create media and connect to strangers who actually want to consume, share and act upon our ideas.

But even as newspapers, record labels and governments have crumbled in the face of this “storyteller uprising” we educators now recognize that our own towering edifice — academia — is not immune.  Globalization, widely-accessible technology and overwhelming student debt have forced many to question the value of higher education, especially as more knowledge is made freely available online.  Indeed a recent article in The Chronicle of Higher Education provocatively asked, “Could Many Universities Follow Borders Bookstores into Oblivion?”  The Wall Street Journal reveled in this “thrilling collegiate coup” in “Watching the Ivory Tower Topple.”  I heard similar high-profile conversations at this year’s South by Southwest EDU conference in Austin, with the “consumerization” of education through mobile devices tied to exciting developments such as “massive open online courses.”

So with the next chapter of the uprising upon us, we will convene a public conversation this April.  “Hacking Edu: From Tower to Town Square” is a series of events that will map a community-sourced rapid response to this issue of growing concern, and solicit commitment to pursuing new ideas in the months to follow.  As a “hack” it’s meant to be a collaborative, iterative and an ongoing push against the boundaries.

We’re organizing this special month in partnership with our students, The Seattle Metropolitan Chamber of Commerce and The Bill & Melinda Gates Foundation through our Four Peaks initiative.  Four Peaks (“powered by the MCDM”) is itself an explicit recognition that a growing number of people in our region want to engage with “life-long learning” and a network of thought leaders, but seek alternative, more flexible platforms than traditional degree programs.  So through this new entity, we seek to “extend our reach” through public events, a television show, influencer roundtables and a workshop-based executive program.

It begins on April 5th at 5:30 p.m., with our Hacking Edu Happy Hour at Wine World.  Tickets are $10 and include drinks and appetizers.  At 6 p.m. GeekWire’s John Cook and Cheezburger Inc. CEO Ben Huh will instigate a conversation based on the premise that higher education is where print journalism was fifteen years ago — on the precipice.  Should it sink or be saved?  How do we “hack” a solution?   We’ll ask you to write your ideas on the wall — our student team will guide you through the four themes)

These students will then present these ideas to a roundtable of twelve higher ed influencers on April 12th.  That will serve as the appetizer for a conversational dinner prepared by One Pot’s Michael Hebb, and hosted by photographer Chase Jarvis in his South Lake Union studio.  The discussion itself will be filmed via mobile devices embedded in a table specifically designed for the gathering.

The more important take-aways from the advisory roundtable dinner will be shared by students via social media and serve as the editorial framing for a special “Hacking Edu” episode of Four Peaks TV on April 19th at 6 p.m..  This free live event will serve as the showcase of the University of Washington’s Husky Fest in the center of Red Square, under a tent that can accommodate up to 1000 attendees (preceded by a reception).  As the host of Four Peaks, I will interview four creative leaders who each have a particular stake in the future of higher ed: Jean Floten (new business models as Chancellor of the online-only Western Governors University), an industry executive on the need for a STEM-educated workforce, Zorin Popovic (how to reimagine curriculum and research, thanks to his innovative use of gaming at the UW) and a fourth, unannounced guest.  We’ll also inject a strong element of creativity throughout with educator and Def poet Mark Gonzales.

Finally, on April 25th we’ll bring it all together with a keynote presentation from Peter Diamandis, CEO of X PRIZE and Chairman of Singularity University on how to incentivize radical breakthroughs for the benefit of humanity — through the power of technology.  Diamandis, our Advisory Roundtable and other distinguished guests will consider the best of the ideas that we’ve developed throughout the month — as presented by students — and help us commit to executing on one of them over the next twelve months.  In this way, we will continue to hack education well into 2013.

If you’d like to support Four Peaks or the remarkable public-facing work our students are doing, check us out!