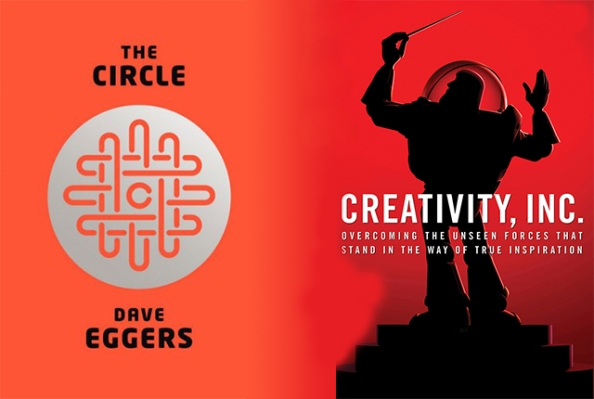 UPDATE: My teaching colleague Brent Friedman and I decided to choose both books for our class. Brent is a successful Hollywood sci-fi writer, transmedia storyteller (especially for the Halo series), and now mobile network platform startup co-founder. We agreed that science fiction can be as relevant as fiction in charting our future, as it is in observing where we are now.

Is there a hidden dichotomy between the two books The Circle and Creativity Inc? It says something about the present state of our connected lives that I’m considering them both as summer reading for our incoming Communication Leadership graduate students.

One is a sunny West Coast dystopian novel about what happens when we surrender everything about ourselves to a monopoly. The other celebrates an increasingly necessary methodology in a world where authenticity has so much currency. Both speak to the inflection point we face as we quickly move beyond connection through our computers and smart devices to, well, everything.

Creativity Inc. presents the concept of the “Braintrust” at Pixar Animation Studios:

A hallmark of a healthy creative culture is that its people feel free to share ideas, opinions, and criticisms. Our decision making is better when we draw on the collective knowledge and unvarnished opinions of the group. Candor is the key to collaborating effectively. Lack of candor leads to dysfunctional environments. So how can a manager ensure that his or her working group, department, or company embraces candor? By putting mechanisms in place that explicitly say it is valuable. One of Pixar’s key mechanisms is the Braintrust, which we rely on to push us toward excellence and to root out mediocrity. It is our primary delivery system for straight talk. The Braintrust meets every few months or so to assess each movie we’re making. Its premise is simple: Put smart, passionate people in a room together, charge them with identifying and solving problems, and encourage them to be candid. The Braintrust is not foolproof, but when we get it right, the results are phenomenal.

It’s the kind of methodology that led to the huge success of the first computer animated Hollywood feature. Thanks to this “Braintrust” approach, Pixar narrowly averted disaster, when under pressure from Disney the first cut of Toy Story had an edgy, mean Woody as the lead character. In two weeks, they turned the ship around.

It’s a beautiful idea really, centered around the notion that collaboration and the sharing of candid opinion can lead to remarkable creative results.

Compare that to The Circle, where the noose begins to tighten around the users (and employees) of a Facebook/Google-styled company that begins to track every human motion and utterance, ostensibly in the name of human advancement.

The rest of America…seemed like some chaotic mess in the developing world. Outside the walls of the Circle, all was noise and struggle, failure and filth. But here, all had been perfected. The best people had made the best systems and the best systems had reaped funds, unlimited funds, that made possible this, the best place to work. And it was natural that it was so, Mae thought. Who else but utopians could make utopia?

The most fervent employees of The Circle are horrifically earnest and well-meaning. To obtain full citizenry (and thus the full benefit) of this ubiquitous social platform, you must share everything (turning off your personal camera only when you go to the bathroom or are in bed). To shore up this “there’s no such thing as Too Much Information” attitude, the company ultimately declares that “Privacy is Theft” — not sharing deprives the operating system that is humanity of vital information.

I must admit relief therefore when I read the recent U.S. Supreme Court ruling on whether the police can search a cellphone without a warrant. The Court’s opinion was thankfully unanimous. It concluded that a cellphone was actually a “mini computer” that was so expansive in what it held within that it contained much of our modern-day “privacies of life.” You can see from the notes that I took (ironically with pen and paper) that sum up this groundbreaking declaration how the Court so ably captured the scale of what these devices do.

So great, we’ve held the government’s intrusiveness at bay for another day, but we continue to willingly document (or surveil) so much of our lives, enabled by monolithic corporations. As Chief Justice Roberts wrote, cellphones are “a pervasive and insistent part of daily life that the proverbial visitor from Mars might conclude they were an important feature of human anatomy.”

Ok, let’s accept this reality which has led to a recent public debate about the disruptive nature of technology at this particularly pivotal time in our history (that threatens everything from our jobs to how we get an education). What do we need to do to survive in this always connected, always digital “Next New World” as New York Times columnist Thomas Friedman put it at his recent conference? According to Dov Seidman, in this highly illuminating conversation, it hinges on new soft skills — “collaboration, imagination, creativity, leadership” tied to the values of integrity and truth. He may have indeed helped me choose which book to recommend to our students…and given me some hope.

This article was also syndicated by Flip The Media