For me, presenting in public is a state of mind. Whether I’m on television, in front of a classroom, or on stage before 1200 people, I see my role as a lightning rod for intellectual and social energy. Despite our “Tricorder Nation” screen overload, our species still sees the benefit of physical interaction. Hence the seemingly insatiable appetite for conferences, events (Comic-Con 2015 sold every one of its 130,000 badges in 60 minutes) and business air travel.

And yet, I ignore the allure of the 21st century equivalent of the quick cigarette-fix at my own peril: in times of boredom, awkwardness or need for a neural boost, we instinctively dive for the screen. And so when I present, I recognize my new two-step imperative: get people’s attention, and then never surrender it.

Obviously, very few of us actually like to “put ourselves out there.” Despite my years of experience, I still find it most daunting in the hours and minutes leading up to show-time. Even for my most recent performances — TEDx Oregon State University and emceeing the Microsoft Cloud & Hosting Summit — I was uncertain as to how I was going to “bring it home” when the time came.

But in both instances, I used three techniques that helped me create a powerful connection to the audience:

(1) Master the material: You don’t necessarily need to memorize an entire speech. But you need to inherently grasp how the pieces fit together into a cohesive narrative structure. If you know where you’re going, you’re more like to be able to bring your audience with you through the twists and turns of public lecture. I don’t like to practice, but with my TEDx talk, I did so incessantly over a 24-hour period (my slides, and the personal nature of the talk helped). I fundamentally understood the story that I wanted to tell, and the crucial points that signaled the three-point structure of beginning, middle and end.

For both TEDx and Microsoft, I also employed an old TV news trick I learned years ago: before I would go live with an anchor thousands of miles away from me, I would know exactly what my first three lines would be — those I would memorize. They serve as a crucial mental crutch as you find your rhythm. Then as the words begin to flow, you can then fall back on your larger narrative structure and speak more naturally, following the gist of a pre-established structure. 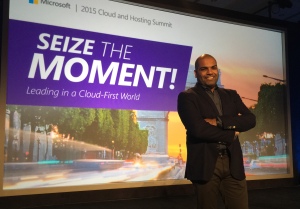 (2) Then let it go: That’s because memorizing a talk word-for-word is the worst thing you can do (other than having a brain fart that could totally derail your entire presentation). It won’t come across authentically or conversationally, and it locks you into a very rigid flow that would not suffer the slightest slip-up. Besides, people can tell when you’re speaking from memory.

In my recent events, I went a daring step further. On both occasions, at the last minute, I decided to “throw out” my memorized opening lines and try to “speak” to the audience. At Oregon State, I don’t know what possessed me but I decided to start with “A BIG HELLO from the University of Washington to Oregon State University!” It didn’t make the final cut of the video, but it certainly got the audience energized. Plus, it was one point of commonality: two top-ranked public universities in the Pacific Northwest with a research focus. With the Microsoft crowd, I played to the fact that this was my second time hosting the summit, that there were a number of returning attendees, and that the greatest benefit to our being there was the chance to network. So I asked them to say hi to their neighbor. The room felt more alive to me afterwards.

(3) Reach out and touch: Indeed, weirdly enough, I can always “sense” when people are paying attention to me and when they’ve tuned out. It’s a strange, other-worldly thing, but it serves as a timely gut check as well as a confidence booster when I know I’ve got them. As ephemeral as that sounds, I take a more concrete approach to achieving that state.

To begin with, whenever possible, try to get a feel for both the room and the stage before the event starts. Pace the stage, get a sense of the sightlines, and even circumnavigate the hall to see what the audience might see a few hours from now. It gets your head in the game as you see how you fit into the larger space.

Then, never forget that you’ve got competition for attention a mere pocketful of silicon and Gorilla glass away. So what utility and value can you deliver to this specific audience right here, right now? Although they’re ideally focused on you, as all good storytellers know, it’s not really about you — it’s about them. They’re looking for a point of relation with their own lives, needs and context.

Sure my personal story as a war-time journalist then independent filmmaker and educational entrepreneur is compelling, but I’m a far cry from Brad Pitt. I found out that most of my TEDx audience would be very smart, intellectually-curious undergraduates. So could I draw lessons from my own experiences in a way that they could see themselves pursuing a similar direction? I was gratified that at the conclusion of the talk, so many people told me they had been taking notes feverishly from my five lessons of professional self-disruption — even as my personal story provided enough credibility for them to believe that I knew what I was talking about.

Our first speaker at the Microsoft summit was a surprise guest, International Space Station commander (and YouTube star) Chris Hadfield. I was tasked with interviewing him live via Skype. In this situation, I had two imperatives: get past the barrier of not having him on stage in person (so direct our attention to the audience as much as possible), and connect his experience with 700 technology industry leaders who’d never been in space. Luckily, as we’re both Canadian, we’re fairly amenable characters (!) so were able to talk casually about risk, the enabling communicative power of the cloud, and when to seize “the moment” professionally, all in a way that made this segment the highlight of the event.

Ultimately, try your best to enjoy this singular opportunity to connect to so many people and ride the wave of their collective energy. Aside from “fight or flight,” it may be the best mindset to adopt when forced into the arena with such a socially intimidating beast!

(I’ll continue doing so myself in two major events to come, as host of the  IN-NW Digital Innovation & Leadership conference April 28-29 in Seattle, and of the inaugural two-day Transition World conference on prosperity through sustainability in Denmark in May.)