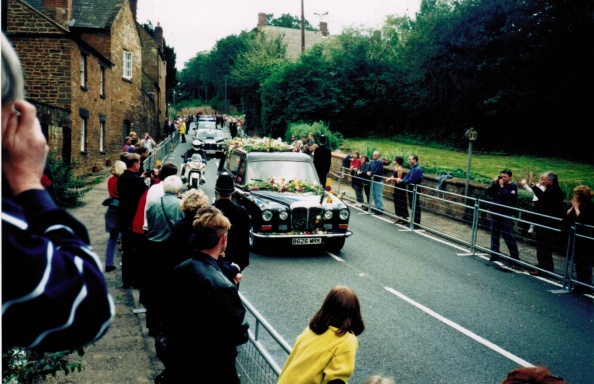 Last night I watched the new HBO documentary Diana, Our Mother: Her Life and Legacy. It was a curious bit of storytelling: the first to feature interviews with her sons, William and Harry, but the nary an utterance of the name “Charles” until near the very end. Still, it evoked vivid memories for me as I was in London to cover the biggest story on the planet at the time for NBC News twenty years ago.

We did it “old school,” no expense spared. At the time, I was working on NBC Nightly News with Tom Brokaw in New York City. I had stayed behind late after our live East Coast broadcast had aired, and received the call in my office just after 7 p.m.: could I fly that night to London (business class because it was overseas and last-minute!) to help produce coverage of Lady Diana’s death? Of course I would say yes, but I was also preparing to move from New York to Tel Aviv to take the role of the network’s Middle East producer. My life then was in turmoil, but perhaps that was to be expected when you’re a twenty-eight year-old who wants to take on the world.

I was born in London to parents on a very tight budget, so it felt surreal to return to the city in such a luxurious way, take an expensive black cab from the airport and check into a four-star hotel that was walking distance from Kensington Palace.

I would spend a few days in London gathering stories of a nation in mourning, but quickly get sent off to Bosnia to look for a feature I could do about Diana’s final public appearance before she died, visiting victims of landmines. In a very short period of time, my colleagues and I would find two sisters who had both lost their legs while tending to their farm. Diana had visited them a few weeks earlier and the Associated Press had filmed it. The sisters lived in a rural part of a country barely recovered from war — they hadn’t heard the news, nor did they have a TV. So we brought a VCR to show them the video and tell them what happened. It was a highly emotional meeting. Unbeknownst to me, I would walk through the same field where they had lost their limbs and only to discover later that they had yet to remove the mines (the country would be mine-free years later, part of Diana’s legacy). NBC had flown in an editor with his huge cases of monitors, videotape decks and mixers to set up an impromptu studio in our Sarajevo hotel. I auditioned and hired two actresses to do the voiceover translation of the sisters’ interview. And we quickly turned around a feature that would air the night that we finished editing it in the field (it would be later nominated for an Emmy).

Upon my return to London, I took the train to Manchester to capture Prince Charles’ first public appearance since the death of his ex-wife. I still have vivid memories of the reporter I was working with taking out his candy-bar Nokia phone while hurtling across the countryside on the train, and tethering the connection to his laptop — something I didn’t think was technologically possible.

But it was still early days for the same advancements that would soon lead to upheaval in the broadcast industry: on the day of Diana’s funeral, I was positioned at the end of the cortege, in Althorp where she was to be buried. Our live shot failed just before the hearse passed us by, and I was unable to communicate in time with the London office. Four years later, I would be (painfully) learning how to shoot and edit my own television news stories, no longer with NBC. Two years after that, I would return to the network on a six-month contract as one of its first “backpack journalists,” equipped with a laptop, a small, inexpensive digital video camera and a briefcase sized satellite phone to cover the war in Iraq. It would be a far cry from the investment big broadcast made during those halcyon days of Diana coverage. And it was just the beginning of a true storyteller uprising as new digital technologies took hold, along with new economic realities.