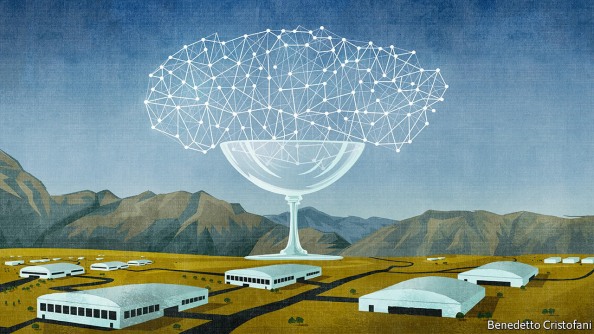 “We’re in an elevator on the fourth floor going up — in a one hundred-floor skyscraper — that’s still being built,” one presenter said at a recent event extolling the potential of blockchain.

Yes, the next wave of highly-disruptive technologies is upon us, which will break through into our physical world with connected devices, artificial intelligence and augmented reality — supported by even more powerful networks and clever systems fueled by our data. At the excellent Digital Entertainment World conference earlier this year, one presenter noted “the future is possibly no screen at all.”

It’s an exciting, somewhat daunting vision. The challenge? We’re still trying to get a fix on this last cycle of innovation that hurtled us forward with similar optimism. But sometimes if feels as if we’re plummeting into a black hole of black mirrored screens.

Last week, the cover of The Economist (I’ve long enjoyed its witty editorializing) declared “Epic Fail” — with the letter “F” depicted as Facebook’s logo in free fall. This week? The workplace of the future, illustrated by “AI-spy” will need to strike a balance between privacy and performance, along with “a strong dose of humanity.”

Meet the new algorithm, same as the old algorithm? The “techlash” is in full effect. Early during the “digital revolution” I often fielded media requests to walk through the latest communication innovation and the wonders it bestowed upon us. Now, that the narrative has turned, I’m called upon to explain the latest public outcry about the platforms that have seemingly overtaken our lives.

As tech skeptic Andrew Keen observed in his most recent book How To Fix the Future, “Silicon Valley’s dominant business model is essentially the commercial appropriation of users’ data.” Some hope that blockchain with its “distributed ledger” might help us cut out profit-maximizing middlemen so that we can control and own our data — be it social media behemoths, law firms or banks.

But we should temper our enthusiasm for such emergent solutions in favor of a more robust form of discovery and discussion around “the new.”

The technologies that are gathering their strength (AI, blockchain and 5G connectivity are my “big three”) are at least as significant in potential societal impact as the Internet has proven to be.

It’s why I accepted Microsoft’s invitation to sit down on-camera with its leadership on AI recently to discuss their Future Computed e-book. It’s crucial that we the public force a conversation about the changes that are coming to how we work, what we learn and who we trust.

Fundamentally, all these technologies should serve us, with a focus on healthy, impactful human interaction. We should demand transparency and accountability from them as they’re being developed — be it by the current giants or the next generation of inventors in their proverbial garages.

This points the way to the importance of mapping those emergent platforms, along with cultivating and helping to deploy them in a beneficial manner. I’m looking to do this now with a group of collaborators by charting the nascent galaxies of innovators, storytellers and brands that want to harness this latest Big Bang of opportunity and impactful change. We call it, “Project Starfield.”

Through this exploratory work, we can gather crucial intelligence about these various entities in motion, incubating new ideas and surprising partnerships. As The Economist concluded in its survey on AI, what’s coming “will be pervasive, devastating and exhilarating all at the same time. Look ahead.”

Agreed. We need to carefully craft the tools that will advance what matters most in this next cycle: human creativity in service to others.