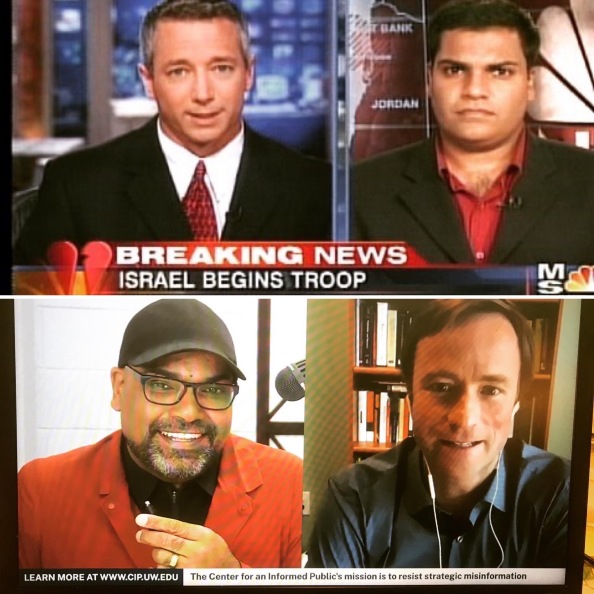 Live video streaming is so accessible — and essential — that our platforms of choice are now verbs. We Zoom, Skype and FaceTime with some one or so many — as I did with the thousands who joined me recently for the one-hour “Surviving the Coronavirus Infodemic: a statewide conversation on healthy digital practices.”
My dad in Toronto texted me right after to say that the production values far surpassed what he saw later on CNN. We’re all deploying makeshift technologies outside the traditional studio, and yet appearances still matter. As does security.  We only used Zoom to connect to our panelists, so the URL was not public to the troll armies. Our livestream guru had a briefcase of switching gear and Hovercast to feed directly into Facebook and YouTube. Rather than rely on social media comments to drive the Q&A, we leveraged startup Thoughtexchange to have the audience “upvote” the responses that came in fast-and-furious. We had already experimented successfully with a version of this set-up for a Town Hall in January when more than five humans were still allowed to gather in the same room.
Remember when the only way to transmit moving electronic images to the world was to “broadcast?”  In the 90’s this NBC News producer used to physically run videotape in-hand to the control room. Overseas, I learned to point an antenna upwards at the closest satellite so that we could get those images back to New York. A few years later I taught myself how to compress large digital video files as a backpack reporter. Those images had to be sufficiently squeezed to go from digital video camera to laptop to phone through a bandwidth-constrained frequency in the most extreme situations: an aircraft carrier in the Persian Gulf, an abandoned Iraqi oil rig, and clandestinely from a hotel room in Damascus.
In 2005 seeking to explore nascent social media techniques, my wife Heather and I set off across the United States (still traumatized by 9/11 and the Iraq War) to produce a documentary without the deep pocketed support of a broadcaster. We had to build an audience as we were making the movie, sharing our experiences by finding wi-fi wherever we could in the small towns we visited (cellphones could barely transmit a photo then, let alone video). A mere two months after we completed production, YouTube was born.
Call it bad timing, but we were also lucky enough to be at the dawning of a new age, hungry for streaming content. So our first documentary was featured on the homepage of a just-launched Hulu, and our second film (about post-Katrina New Orleans) was picked up by Netflix — both deals thanks to creative hustling by our business partner Tom Powers.

Certainly it’s gotten so much easier to reach others through the latest technological miracle. But it also takes greater effort to break through a screen that both illuminates and separates.

Consider it a highly concentrated transfer of energy beyond mere imagery: a sparkling discourse supported by fearless eye contact, which honors curiosity as much as it relieves anxiety. How we can find new ways to relate (the most important verb of all) to one another is what’s most fundamental to our survival.