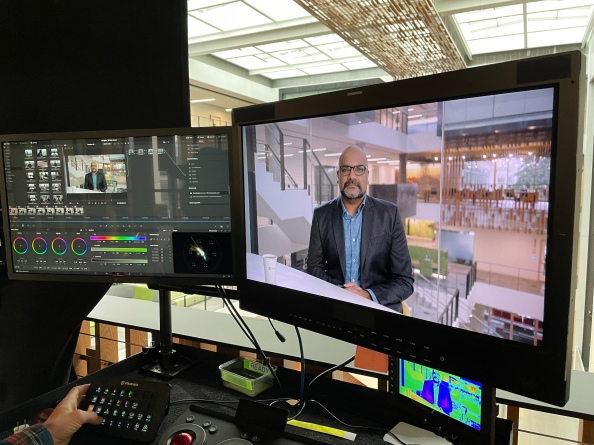 My guests and I explored the crisis’ impact on both the business models of creative and cultural institutions, as well as the changing nature of inspiration during such an upheaval. I raised the point that we may have made room for more forms of creativity and connections by loosening our expectations around production standards and professionalism. Case-in-point: web cameras and broadband substituting for 4k videography and satellite connections. Even global media companies will suffer through poor lighting, audio and video compression if they still have access to the content.

Still, nearly a year into this ordeal, it’s worth differentiating ourselves from the plethora of webcasts masquerading as broadcast television and TED conferences.

For the above episode, the spreading contagiousness of the pandemic forced me from my campus office studio to my home. I upped my game by using deploying a Panasonic G9 Micro Four Thirds camera, with a very sharp 24mm F1.8 Leica Summilux lens (though with a $10 HDMI to USB 1080p connection). But since it was still a prosumer-like makeshift solution, I added a few backup devices, along with hard wired internet and three lights. I still found my best microphones were the on-board ones on my 16″ MacBook Pro. I used professional in-ear monitors, hidden from view, to avoid any speaker echo as my remote production colleagues and I were using two streaming platforms simultaneously: Zoom on the back end, with a more professional switching look for our viewers via vMix.

The virus’ creative and physical constraints force a strange, stressful kind of daily calculus. When I do have the opportunity to venture out for work, how can I maximize that risky venture for a change in perspective? Invariably for me, that involves whether I can get on my bike or not.

The morning after the COVID show, I had to make my way to Microsoft’s headquarters for a day’s work on-camera. I had packed my miraculously wrinkle-resistant Italian wool suit into a waterproof German bag. I had been looking forward to that seventeen-mile commute to Redmond, Washington all week. But I suddenly wasn’t feeling up for the cold, dark, wet ride. And I was running late. I elected to drive.

But as I stepped into the garage, I saw my bicycle. Inexplicably, I secured the bag to it. What was the harm in a quick spin to clear my head before I got into my truck for the drive?

I pledged to return after no more than ten minutes. Yet, as I continued to pedal, I monitored my potential arrival time on my phone. That self-designated “point of no return” began to elongate as I acclimated to the feeling of freedom.

Then I passed that point when it would take me longer to return home and start driving than to push on. I had no choice but to keep going. I increased my cadence. Amazingly, I arrived two minutes early.

It was a necessary mental antidote to the anxiety of our times. I still wore a mask the entire way. I put on a dry one before entering the building (counterpoint: due to zero company staffers on hand, I could bring my bike indoors). I had to show that I had tested “negative” for the virus two days previous to even be allowed on Microsoft’s campus.

Contained in a small room with a masked and goggled camera operator with highly professional equipment (two truckloads managed by a crew of ten), I put my devices into airplane mode so I could maintain my focus during what would be an arduous day-long performance. Offline, I missed calls from a television reporter seeking comment on the latest news regarding social media and the outgoing U.S. president (which would be done via Zoom of course, unlike a previous in-person interview I had given a day earlier).

Depleted from needing to hit a much higher bar than usual, I rode more slowly on the return trip. As I took to the Sammamish River Trail, the rain subsided and the clouds broke. In deliberation, I dismounted to capture this with my smartphone.

Here’s to accepting our muse when and where we can find it, similarly using the best-available tools.

(Audiobook recommendation for any mode of commute right now: “Wintering” by Katherine May)