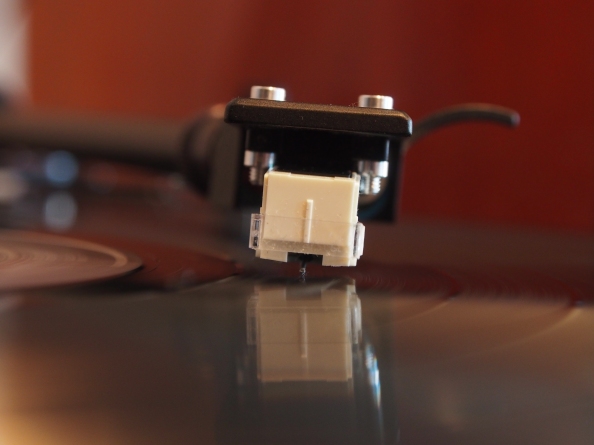 I’m still trying to understand why I did it. Why I purchased vinyl for the first time in decades (first the new Rush album, Clockwork Angels, later the three reissued The Jimi Hendrix Experience studio albums in honor of my son, Hendrix R.), and carted back dozens of decades-old scratchy records from my parents’ basement. Then I had to purchase a turntable (a Denon DP-300F).

After all, I happily abandoned vinyl in the late 80’s when convenient, portable, flaw-free compact discs hit the mainstream. Indeed, my ratio of CD ownership to vinyl is 10:1. Even today, I’ve somewhat embraced the cloud  (I’ve uploaded 13,000 songs to Google Music and iTunes Match, and just signed up for a premium MOG membership), I still purchase the physical artifact of music that means something to me. That’s because despite my aging ears, I’ve become increasingly sensitive to compression. I can hear when the breath and life of music has been squeezed out in favor of efficiency or loudness. And it drives me crazy.

Apparently, it’s more maddening than vinyl’s snaps, crackles or pops. I’d already been building a sizable collection of hard-to-find, near-obsolete SACD’s and DVD-Audio discs because of their higher resolution. But as my audiophile-friend Mac Parks would happily tell me, nothing trumps vinyl (just the cartridge on his turntable is worth three times the value of the Denon that I purchased). I’m clearly late to this party, as turntableneedles.com reports that vinyl sales are up 39% in 2011, to 3.9 million records.

But…as I wallowed in teenage nostalgia going through my dusty archives, I heard it: an unhealthy amount of distortion during “South Side of the Sky” on Yes’ classic 1971 album Fragile. Yes, I bought the record in the early 80’s. Yes, I probably heavily abused it on a cheap record player. No, it’s not the first time I’ve heard it — I just blamed it back then on my substandard equipment.

Thanks to Google today, I read all about Inner Groove Distortion (IGD). A record is like a screw, and as you get closer to the center, there’s less space (and less speed). So waveforms are shorter, meaning less room for high frequencies to move the stylus. Yup, I’ll just call it natural compression, and it sucks. “South Side of the Sky” happens to be the last track on side one, closest to the label, and it’s loud. I even learned that musicians (and their engineers) would often deliberately program an album to end the side on a quieter track to minimize IGD. Talk about the medium supplanting the message!

So to improve how my turntable reads those challenging frequencies, I’m upgrading the stylus (to a “Shibata” style one — don’t ask) and even purchased a vinyl washing system — things I never concerned myself with as a kid. Does that mean my analog romanticism is fading as quickly as it was born, even as I publicly grow more disaffected with the noisy, repressive regimes of Facebook, Twitter et al.?

Well, compression (to me) is ultimately the efficient management of data so that it travels to its intended destination safe and sound. As someone who built the most recent chapter of his career around compression (figuring out how to transmit live shots from the middle of the Iraq War back to New York over a 128k satellite phone; squeezing large video files to a practical size so that I could upload daily reports from rural America while producing my documentary film — sadly, mere months before YouTube was introduced), I can hardly renounce my old friend.

Fittingly, the clouds parted when I spun side two of The Police’s best album, Ghost in the Machine (pictured spinning above). “Too Much Information” sounded crisp, clear, full, and Sting’s economy with a lyric was on excellent display:

That’s pretty much it for the song, which happily resides on the “outer groove” of the disc. Maybe reducing the noise comes down to choice of real estate along with a clear, clean signal path. I think I’ll run with that in all my communication, both analog and digital. Buried alive somewhere in that data, crammed into those tight confines, there’s gotta be some soul.

p.s.: Over the weekend, an Italian reporter from Corriere della Sera reached out for my thoughts on the growing phenomenon of “trust in strangers.” Given that she has more Twitter followers than I do, I felt compelled to reply to her e-mailed questions.  So she took my English answers, translated them into Italian (link to article), and then I used Google Translate to render what she used back into English. Probably more noise than signal (aka “Lost in Translation” rather than “Ghost in the Machine?”), but here it is:

According to Hanson Hosein, Director of Advanced Digital Media at the University of Washington and author of Storyteller Uprising: Trust & Persuasion in the Digital Age , the desire to share that is typical of Internet users: “They love to share their experiences. They do it for creative needs or because they are passionate about a subject: online are the ideal platform to express themselves, “he says. “Helping others – still – is the symbol of a value that others can recognize and reciprocate. Whenever a critical comment or make a valuable review, your status on the network increases. And this is a great incentive for the digital life. “