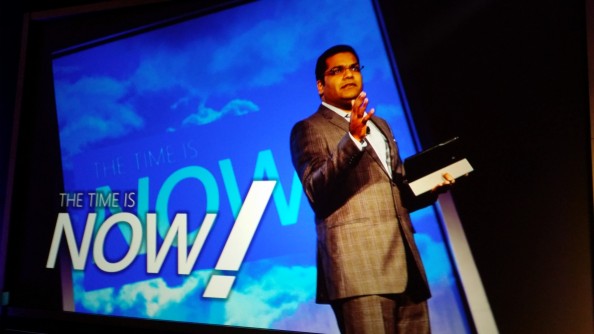 The subject line sounds like the setup to a joke, but it’s not. Neither is Microsoft announcing Office for iPad. Finally.

Over the past few weeks, I’ve been experimenting with leaving my laptop behind and leaping into the fray armed only with a handheld smart device.

I emceed the annual IN-NW social engagement conference with an iPad Mini, using Evernote for my briefs. This is usually the go-to method for my public appearances. I did the same this week while on-stage at Dent The Future in Sun Valley.

I attended SXSW Edu with the same iPad, and took a Windows 8.1 tablet for a spin (I had an Acer Chromebook for the flight over, as it gave me free GoGo WiFi). When it came time to upload the HD video I had recorded of my colleague Anita Verna Croft’s talk (which I had shot on a Sony RX100 point-and-shoot camera), I discovered that quickest way to publish was to pop out the SD card, and connect it to my Samsung Galaxy Note 3 phone via USB MHL adapter. It worked like a champ and within minutes, the video was available on YouTube and Dropbox. The video was later edited by our in-house storyteller on her Macbook Pro.

Last year, when I interviewed Amazon.com founder Jeff Bezos, I used a Kindle Paperwhite to refer to my notes when we were on-camera (which Bezos noticed immediately and expressed appreciation). Last week, I emceed the annual Microsoft Hosting Summit and used an Asus Vivotab Note 8 as my on-stage notebook. Although I had done so initially out of respect for Microsoft, I found that I truly found that my return to the company’s OneNote app was a highly productive experience. I took advantage of the Vivotab’s Wacom digitizer to annotate PDF’s and scrawl ideas during my research. On top of that, I really liked the simple, neatly-laid out UI when I had to think fast on my feet while interviewing a tech executive under harsh lights. Happily, Microsoft had just introduced OneNote to Mac OS X, something they had resisted for years (it was never part of the Office for Mac suite).

That resistance crumbles further today under the leadership of new CEO Satya Nadella (who comes from the same hosting and cloud business that I partnered with last week). And while yes, the world may have moved on while Microsoft dithered on becoming platform-agnostic with Office, I’m glad they’ve come around. Despite my adoption of newer, mobile-first applications such as Evernote, Quibb, and Dropbox, there are still certain occasions where you need the full functionality of Office. Over the last month, I’ve had to edit a macro-infused Excel spreadsheet when time was of the essence, as well as review a heavily marked-up Word document. Luckily, in both instances, I had the Vivotab 8 which is actually a sub-$400 full-fledged Windows 8.1 computer (minus the keyboard). But Windows 8.1 still has some usability challenges for me (Desktop mode is hard to use on a tablet), so Office on the iPad is most welcome.

As you can tell, I’m still battling to figure out the one mobile device that can do everything for me. For now, I’m happy to be multilingual in this multi platform world. Yet, I’m finding more reason to pay attention to Microsoft. And that’s no joke.

Despite all that, I’m hosting an event this evening that features the founder of Zillow, the creator of Xbox and the head of Flickr at Yahoo!. I’m choosing to go with the iPad and Evernote for what should be a fairly easy conversation. But I’m downloading Office for iPad even as I write. It’s worth noting that even as Microsoft delivers Office to the iPad, it has yet to do so in a touch-friendly format for its own tablet platform on Windows 8.