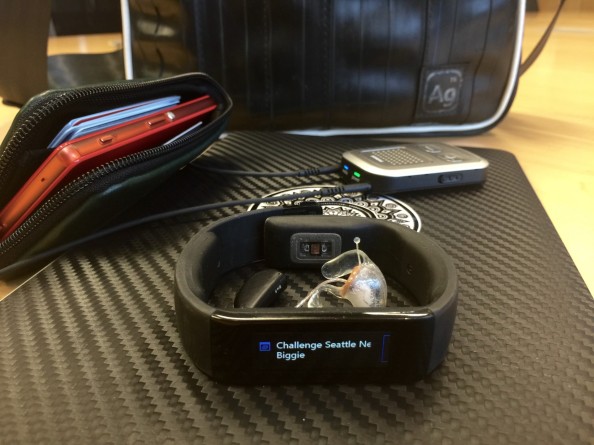 [TLDR version: “I’m getting old and I’m dealing with it!”]

As the archetypal “early adopter” I haven’t shied away from getting increasingly intimate with technology, especially as it gets more personalized. I’ve often sported a bluetooth earpiece when I’m driving or biking in an attempt to simulate the “wearable” experience — listening to audiobooks, having text messages read aloud, or using voice activated commands.

But I drew the line last year after I gained acceptance into Google Glass Explorer program. I ultimately decided not to spend the $1,500 to potentially be branded a “glasshole.”

I dunno, maybe it’s where I am in life right now but after interviewing the Amazon founder, I decided to adopt Jeff Bezos’ gradatim ferociter philosophy (“step by step ferociously”).

My time with a kick-my-ass personal trainer revealed that I had been taking it way too easily on myself physically — which led to shedding a few waist sizes.

Fed up with having to deal with my hair on and off camera, I shaved it all off.

My teenage self had been careless, wearing headphones as I overdrove my father’s stereo system to distort my electric guitar. I also attended a ton of concerts in my youth, including being somewhere in the room at this historic early appearance by Stevie Ray Vaughan. I couldn’t find myself in the above video, but as I watched it brought back memories of a sweltering hot, and especially loud evening. Of course I wasn’t wearing any ear plugs as I do now (and as I will to see guitarist Steve Hackett next week here in Seattle).

My adult self hung around too many loud fighter jets (I once lost my hearing temporarily while embedded on a U.S. aircraft carrier in the Persian Gulf during the second Iraq war) and other machines of war without adequate protection. Because of all of this abuse, I had killed a few key frequencies that match where a woman’s voice typically falls on the audio spectrum. The humor of my particular condition is obvious, but as an educator and an public convener, I have to be able to pay attention to others — especially my wife — without stressing out.

So I’ve decided to own this disability. I adapted my bluetooth habits and saw the benefit of always having socially-acceptable technology inserted into my ears that could also connect to my phone. I told my students about it during our Communication through Digital Media & Networks class this fall, assuming a few would notice the devices in my ears anyway. I even bought a couple of accessories that would facilitate future production of my Four Peaks TV show. I’d no longer need an “IFB” earpiece — my producers could speak to me directly via a remote mic into both ears now.

I could be slightly ahead of the curve on leveraging a physical liability into a technological asset. Note the just-announced Soundhawk bluetooth hearing device with the added bonus that I don’t look like Joaquin Phoenix in “Her” with my less conspicuous (though considerably more expensive) in-canal Phonaks.

Ultimately, this may be my first step into what I’m calling a “post-screen” world. I can actually put the phone away (presently the red Sony Xperia Z3 Compact inserted into the Waterfield Designs “Finn” wallet pictured at the top of this post). I get discrete notifications in both ears.

I also acquired the Microsoft Band on its first day of availability (the benefits of living in the company’s front yard with a Microsoft Store within walking distance of my office). I nearly returned the fitness wearable due to its poor battery life and because it’s not waterproof.

But I really like the candid behavioral functionality (and convenience) if offers me: steps, sleep, time, e-mail, Twitter, text messages, and sometimes-accurate heart rate. I had silently been hoping to find out who had designed the beautiful user interface because it felt so “un” Microsoft. Amazingly, I was wearing the Band at a recent event when Devlin Bentley, the boyfriend of one of my students came up to me and told me that he had led the UI development for the device.

This may read as a massive rationalization for someone who has to wear a hearing aid well before his retirement. But I see it as an opportunity to “go public” about my new reality. And maybe I can find a silver lining or two in a carrying yet another battery-powered device in this pervasive state of (over)connectivity.