[This is an expanded version of my opening remarks that set the stage for a conversation that I moderated at the University of Washington on November 28, 2016. The Seattle Channel streamed the full event. The UW Daily published a summary]

Without a doubt, what happened the night of November 8, 2016 was cataclysmic. Almost no “expert” saw it coming.

Hillary Clinton won in a landslide…of newspaper endorsements. Even the very Republican-oriented Wall Street Journal had an editorial board member who endorsed her. My favorite publication, UK-based The Economist assumed she would win until the very end. So did Clinton — I walked by her election-night victory stage in mid-disassembly the following day in New York City.

And the pollsters kept running probabilities — always in Clinton’s favor.

All of this did align with what we’re seeing in the popular vote, with Clinton ahead by over two million votes.

But we aren’t here tonight to discuss the merits of the electoral college versus the national vote. There’s a Republican president-elect. A Republican Congress. And a plurality of Republican state governors. It’s said that the Republicans haven’t had this much political power since Herbert Hoover in 1928.

We should even ask ourselves tonight if we’d even be here, in this bubble of all bubbles — the University of Washington within the very blue mini-“state” of Seattle — if the outcome had been different. No doubt, feelings here are raw. Disbelief is high. But we aren’t here for an airing of grievances. Something profound happened three weeks ago and we’re still trying to make sense of the shift. A lot of it has to do with media — new and old. And technology.

As I prepared for tonight, I came up with this:

“Facebook. Twitter. Text messaging. The president-elect used all of these digital tools to devastating effect…in the 2008 election”

Yes, eight years ago, a few hundred feet from this building, I hosted a similar conversation about Barack Obama’s historic presidential win. We called it the “first digital president.” Feelings about this new “paradigm” seemed to be much more positive then.

Here are some sample headlines to consider:

“Trump poses an existential crisis for journalism” — Christiane Amanpour, CNN — referring to a “post-fact” “post-truth” or even a “post-values” era.

“Trump may not be good for america, but he’s damn good for us.” — the CEO of CBS during the campaign season.

Donald Trump drove the twenty-four hour news cycle. He tweeted in the early hours of the morning and TV news editors would pick it up as the story of the day. It even happened again this weekend, and yet again CBS rose to the occasion. As calls for a recount occurred in swing states, Trump tweeted: “I won the popular vote if you deduct the millions of people who voted illegally.” — without citing any evidence about this massive voter fraud. CBS news followed with this headline: “Donald Trump: millions voted illegally in election” A few hours later, caving to heavy online criticism, CBS would change the headline to “Donald Trump, citing no evidence, claims millions of people voted illegally in the 2016 election.

We now have critical mass on social platforms. Facebook has 1.79 billion active users worldwide. In December 2008? They had 145 million….We’re talking about massive scale: 44% of Americans now get their news through Facebook. And the Trump campaign used this as “counterprogramming” to traditional news sources.

Yes, FDR had radio, Kennedy TV, and Reagan CNN. All of those emerging mass media platforms “changed the scale of the audience” and ultimately political and social culture through new voices and audiences.

But to me, this one feels “different.” Those previous “revolutions” were spearheaded by a small number of organizations, applying a filter and trying to reach a mass audience with common denominator programming.

As Sam Biddle wrote in The Intercept: “There’s simply never been a company like Facebook before — able to singlehandedly distribute and filter information to over a billion people every single day.”

Indeed the Trump campaign spent more money on Facebook ads than anywhere else, at any given time, his campaign ran forty to fifty thousand variants of ads. By doing so, it got real-time feedback as to what was resonating.

And they raised more than $250 million in four months, mostly from small donors — at a relatively low cost.

The Trump campaign delved into message tailoring, sentiment manipulation and machine learning. the traditional campaign is dead, another victim of the unfiltered democracy of the web, and Kushner, more than anyone not named Donald Trump, killed it.

As you may have heard, this unfiltered web democracy has also led to a proliferation of fake news and outright lies:
“Pope endorses Trump”

Crazy yes. but those headlines elicited hundreds of thousands of shares, likes and comments — if not millions. and they were impossible to debunk among all the other noise.

Facebook is now under fire for not doing enough to police fake news and hate speech. I was at their headquarters right after the election, and they’re asking questions about their role and impact. Is Facebook a media company? Does this organization of unprecedented scale and influence have an ethical obligation to police truth and fact?

Do we have an obligation ourselves?

So much of this is happening in real-time. Last week Stanford University released a study that polled nearly 8,000 students from middle school through college. It found that 82% of them couldn’t distinguish between an ad labeled “sponsored content” and a real news story on a website. It concluded that “digital natives” are “easily duped.”

On November 8th, everything changed. Because in hindsight, media — powered by exponentially scalable technology — made it inevitable. 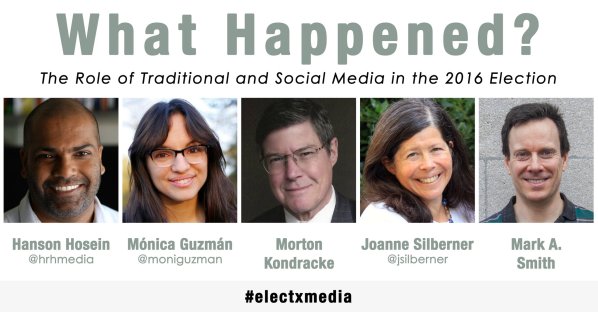